The corner reflector antenna is one of the many types of antennas that is fundamentally based on the standard dipole antenna, with one major difference. This antenna adds a reflecting corner to the dipole creating a directional antenna. This antenna often uses a dipole as the radiating element, however a folded dipole can also be used. The dipole is mounted in front of two flat rectangular metal pieces joined (or bent) at an angle, usually between 80° and 120°.

Dimensions of a traditional corner reflector

A well designed corner reflector can have a peak gain between 8-15 dBi, and as such it is considered to have a directional pattern (click to rotate 3D image below) which is linearly polarized along the length of the dipole antenna. 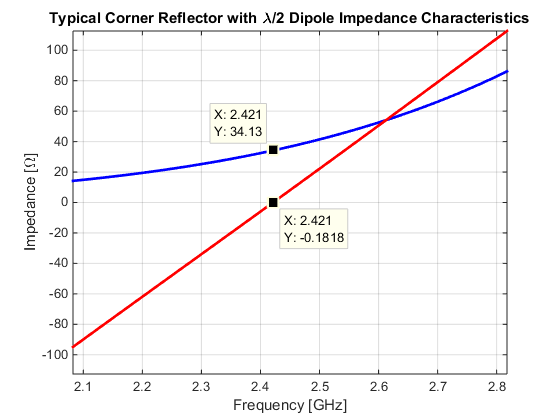 The 50Ω bandwidth of a 2.45GHz corner reflector antenna is shown below. Slightly more bandwidth is obtainable when balun is used to transform to the proper impedance (34Ω for this particular antenna).