The microstrip patch antenna takes on many forms and has been widely used in the past due to its low profile and ease of manufacturing. There are many different types of microstrip patch antennas, and many of them can be found in the MicrowaveTools Antenna A-Z database. While this type of antenna is not used as much as it once was, the theory behind this antenna has led to many of the more modern antennas such as the IFA, PIFA, and FICA antennas. All the equations for determining the size and impedance of an inset fed patch antenna are at the end of this post. Matlab scripts are provided. 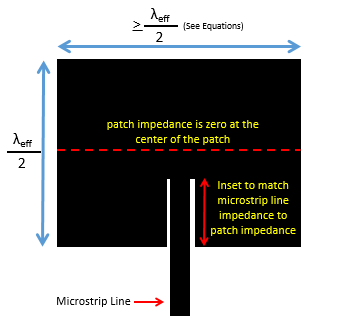 A well designed patch antenna can have a peak gain between 6 and 8dBi, and as such it is considered to have a directional pattern (click to rotate 3D image below) which is linearly polarized along the width of the patch.

long. Note that the wavelength depends on the material situated between the ground plane and the patch; meaning when air is between the patch and ground, the length of the rectangle electric conductor is

of the free-space wavelength ( 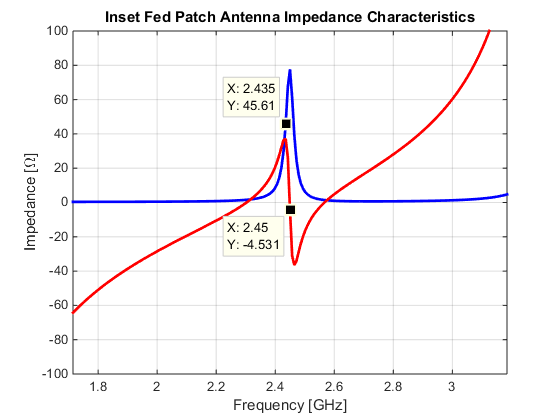 The 50Ω bandwidth of a patch antenna designed to have a resonance of 2.45GHz is shown below. This type of antenna is inherently a high Q antenna, meaning that this antenna is relatively narrow banded. 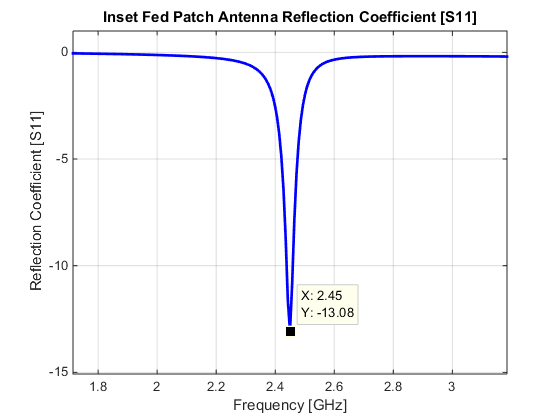 There are many different ways to feed a patch antenna, the inset fed patch antenna is fed via a microstrip feed line connected to a specific point within the patch. Through varying the location of where the microstrip connects to the patch antenna the measured input impedance can be controlled. In the reflection coefficient shown above was matched to a 50Ω microstrip line. 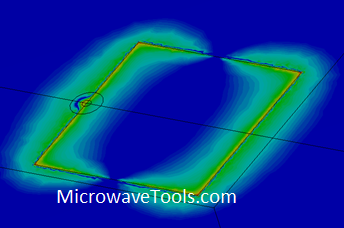 The patch antenna radiates from the side in which it is fed and the opposite side.

The patch radiation is effected by the microstrip line, due to the microstrip line “blocking” some of the radiation. This creates a skew in the pattern, causing the boresight of the antenna not being located exactly normal to the planar surface of the patch antenna. A typical skew is between 3º and 8º depending on the width of the microstrip feed. This means that it is not possible to make an inset patch radiate with circular polarization without using four feeds.

More in depth understanding of the inset Patch Antenna
(Matlab/Fremat Links at End):

The inset patch design has three distinct geometrical regions. The first is the actual patch itself. The second is the feed line. Finally, the third part is the ground plane. It is possible to derive the parameters of patch antenna using a few different techniques. This article will focus on the cavity model approximation in most situations and will fall back on the transmission line model to derive parameters such as the input impedance of the patch.

It is possible to determine the width of the patch, w, using Equation (1). The width of a patch antenna is good starting point when designing a microstrip patch antenna. This is due to the width not having a significant impact on the operational frequency of the antenna, and tends to have the largest effect on the bandwidth and the input impedance (excluding dielectric height and constant) of the patch antenna.

Prior to determining the length of the patch, L, the effective permittivity of the substrate, εreff, must be calculated from Equation (2).

After calculating the patch length, the feed line characteristics can be determined. There are many different feeding types that can be implemented in a patch antenna; in this particular patch antenna an inset microstrip feed will be used.

In order to determine the approximate input impedance of the patch antenna, many different approaches have been derived. One in particular is derived in [1] by analyzing the patch antenna as two slot radiators. In this derivation the admittance is calculated using Equations (6), (7), and (8).

is the Sine integral function

Once the edge impedance is derived, the next design parameter is to properly interface the feed line impedance with the patch antenna impedance. The current to voltage ratio changes as a function of

The final design consideration of the patch antenna is to ensure a large enough ground plane is used for this particular derivation. Equations (11) and (12) determine the minimum ground length and width that should be used with this particular design.

Links to Matlab and Freemat websites